0
486 Views
0
Warning: json_decode() expects parameter 1 to be string, object given in /var/www/thinkingofsth.com/wp-content/plugins/posts-social-shares-count/classes/share.count.php on line 66
0
Shares

After scooping up an Oscar for Best Supporting Actor for his role in Quentin Tarantino’s Once Upon A Time In Hollywood, Brad Pitt has managed to go viral on social media thanks to an amusing picture.

The picture in question was snapped by a photographer who spotted Pitt lounging casually in the Governors Ball after the awards show had concluded, which is where the stars lucky enough to win a statue get their names engraved onto it.

Pitt’s super-relaxed stance shows how at ease he was with the whole affair. Wearing a pristine black velvet tuxedo, Pitt looked as though he had been cracking jokes with the engraver while he was etching his name into the prestigious award for portraying stuntman Cliff Booth. 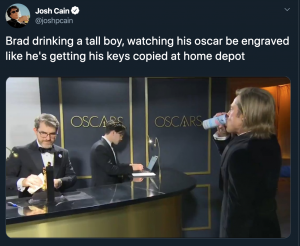 Best Supporting Actor Brad Pitt waits for his Oscar statue to be engraved at the Governors Ball following the 92nd Academy Awards in Los Angeles. Photo by Eric Gaillard pic.twitter.com/ZhI0E1dtRm

Brad drinking a tall boy, watching his oscar be engraved like he’s getting his keys copied at home depot pic.twitter.com/f5eiUz13aS

In an emotional Oscars acceptance speech, Pitt appeared to rail against the Trump administration, stating: “They told me I only have 45 seconds up here, which is 45 seconds more than what the Senate gave John Bolton this week. I’m thinking maybe Quentin does a movie about it. In the end, the adults do the right thing.”

He continued by thanking his costar Leonardo DiCaprio, as well as: “Geena [Davis] and Ridley [Scott] giving me my first shot, to all the wonderful people I met along the way to stand here now.” 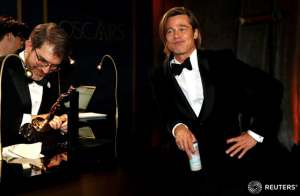 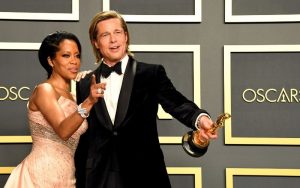